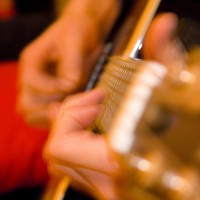 The Sim Band was brought into being by myself on 31 August 2004 just containing me as all 5 members at the same time. :-)

The music published by the Sim Band has always to be seen as mainly some kind of musical diary of myself. I'm never recording music with the goal to make money with it. One of my main reasons to make and record music is to freeze the current state I'm in in order to listen to my music after some time and see whether I made satisfactory progress. Furthermore, my music helps me a lot to handle particluar experiences in life and is a real treat for my soul! Another important reason for me to record music is to be helpful for other people learning music or any details of practical playing because this is exactly the way I learned the vast majority of songs.

The debut CD "4 Weeks At Home" was released on 02 October 2004.
The style of this album is characterised by a musical mixture inspired by Deep Purple, Pink Floyd and of course Eric Clapton. However no single song is covered but hand made by The Sim Band!

The second album, "Another Day", was released on 21 February 2005.
Improved facilities concerning the used instruments allowed The Sim Band to present a much finer and more perfected style. On this CD The Sim Band dabbles in different types of music.

Finally, the third album, "Changeover", was released on 15 August 2006.
This name is related to the new bought stage piano Roland RD-700SX instead of the before used Yamaha P-120S. Some of the songs on Changeover are played on the Yamaha piano and other songs are played on the Roland piano, among other things.

You can find all of the Sim Band's songs published under a creative commons license and listen to every song as well as download everything on Jamendo: http://www.jamendo.com/de/artist/Sim_Band

Read more about the Sim Band on their SoundClick artist page: http://www.soundclick.com/simband

There you can also listen to the songs!!